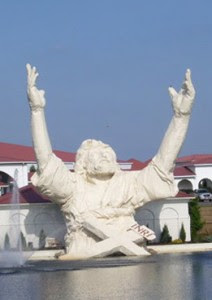 Lightening struck this 6 story statue of Jesus, often called "Touchdown Jesus" because of his outstretched arms, last night (June 14, 2010). It was erected at the Solid Rock church in Ohio between Cincinnati and Dayton. It burned to the ground because it was made of styro foam, and fiberglass with a metal skeletal structure. I guess "Solid Rock" church is not as solid as advertised, nor made of Rock.

One article said the statue cost $500,000 to make and was shipped from Florida. The church has said it intends to rebuild it (resurrect?).

I have to think that there are better ways to let the neighborhood see the body of Christ. One must assume there are also better uses of kingdom resources.

We are left wondering if it is mere coincidence that lightening struck or is it from God? That is a question that the leadership of the church should probably spend some time asking before they rebuild it. What are some ways we can tangibly let people see the true beauty of Christ's body in our neighborhoods and nations?
Posted by Neil Cole at 3:51 PM

Thought much the same when I heard this on the news. There is much the leadership of the church should probably spend some time thinking about, including their poor understanding of Christ's message and methods.

You know, to me it looks more like Peter sinking into the water and calling out, "Lord save me!"