I just returned from a wonderful trip to France. Doesn't that sound romantic and adventurous? Well, it wasn't so much that, but it was good for my soul in a different sort of way.

First of all, it was for meetings with my peers and my denomination so I had to pay my own way and of course there was no honorarium. God provides.

I stayed in a room with lots of noise from my roomates. All night mosquitoes were buzzing in my ears and biting any exposed skin. My bed was broken and sagging in the middle. One night U2 songs started blaring at 4:00 AM (at least it was a good selection of music).

I have a stock of upgrades good for anywhere in the world in my United frequent flier account, but I didn't pay enough for my tickets to qualify to use them. Hmm? Airlines can be strange in the way they promise gifts that are not really gifts. I willingly sat in economy feeling that I do not want to become some spoiled traveler. As the trip progressed, the Lord made sure of that.

The trip home was long (24hrs) and uncomfortable. There was no audio in my seat entertainment system so I couldn't watch any of the movies. The batteries in my computer were depleted from usage on the train ride from Lyon to Paris. The passenger next to me consumed both arm rests, but that wasn't really enough for her, so her elbow was in my side for the most of the 9 hour flight. I was leaning into the aisle for air which meant being jarred awake occasionally by passengers, flight attendants and a service cart or two. In Chicago I was bumped from my last leg and sat in O'hare airport for four additional hours.

For all this discomfort I came home with $650 in vouchers for other flights (like I said, God provides). Isn't it strange that the reward for discomfort is to have the advantage of getting more...for free? I guess that's better than paying for it. The airline industry is really something else these days. They are masters at giving us less for a higher cost and convincing us that we are getting a deal.

Actually, I am glad for the trip for many reasons. Our meetings were in an old French Castle in wine country known as the Chateau de St. Albain. This is a special place in my own denomination's history, and it holds some important memories in my own life as well. I have had some of the most dramatic spiritual experiences in my life here on this property. 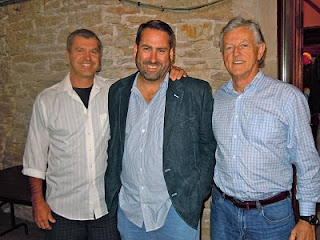 a "coincidence". Linus Morris, the founder of Christian Associates International was there with the other group. I went to High School with his daughter, Laina, and the two of them are the first people to ever share the gospel with me. Obviously it stuck. Phil Graf, an old buddy and now husband to Laina was also there. Dave DeVries, whom I have known for almost 20 years was also there with the other group.

In the group I was with Tom Julien was there who is a spiritual father to me in many ways. Tom first purchased this property 45 or so years ago and used it as a sort of L'Abri similar to Francis Schaeffer. Tom is an important mentor in my life and helped me discover what we refer to as the DNA (Divine Truth, Nurturing Relationships and Apostolic Mission) of church. He mentioned 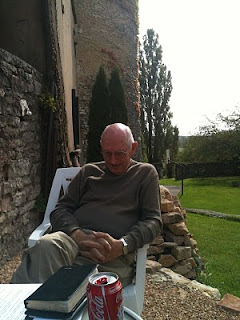 that this trip could be his last to the Chateau, but in my heart I do not believe it true. Either, way, this was an important trip for him and for the rest of us who were with him.

Some brothers that I rarely see but have deeply spiritual experiences with were also in the group I was meeting with. When I consider all of this I realize I would pay much more for such an opportunity.

Our discussions were rich with profound implications, which is usually not the case with denominational meetings. Church planting leaders from my denomination scattered all over the globe came together to discuss the releasing of the apostolic gift in missional church movements around the world. Wow, just that I could say that sentence is a miracle worthy of note! 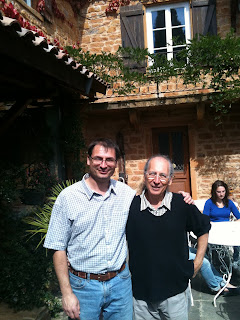 From the Chateau I went to stay with my good friend Florent Varak in Lyon and share some teaching at his church there. Before the training time, however, I had the unique priviledge of sharing a lunch with his mother and father at their beautiful french home. After the delicious meal Florent and I had a remarkable discussion with his father, a spiritual seeker. I had strange feelings in this home, as if it was a French version of my own home. Beautiful artwork was all over and the home reminded me of my own childhood home, though it was larger and better kept. I felt a strong feeling of love for Florent's father and consequently I feel an even stronger kinship with Florent. Florent's two daughters and Lorie his wife were also with us and their affectionate banter really reminded me of my own two daughters and Dana. Their brother was away (at school) and my girls brother is also away (at Discipleship Training School with YWAM).

The travel was not easy, but the time was definitely worth it. So I am not complaining. When I realized that the apostle Paul's travels were far longer, far more uncomfortable and occasionally quite wet (shipwrecked 4xs) I understood that the discomfort in this travel was like traveling in luxury. Sometimes we just need a heavy dose of reality to sober us up and show us that we should not be spoiled divas. Entitlement settles in our souls with such subtlety.

God's grace is sometimes a splash of cold water in the face and I am grateful for it. It is also served at times with a delicious meal and meaty discussion in a beautiful home in the French countryside.
Posted by Neil Cole at 2:12 PM

Hey bro...so delighted that God brought so many great people together for a great trip. Trying not to be "envious"...in a good way. :)

Glad you had a good trip with great people! Awesome how Jesus made all the appointments!

Hello, my friend. I happened upon your blog and was honored to see you with my man and my dad! All in all, 3 of my most favorite men in one photo...only missing my 2 boys and my brother.

I love to read what you write and will continue to do so. God is working all around us in Lisbon, despite many personal hardships. I may forward you my most recent happenings last night.

I am so proud of you, Neil, and ever grateful to a pursing gracious God who goes to no end to capture our hearts. love, laina

Hello, my friend. I happened upon your blog and was honored to see you with my man and my dad! All in all, 3 of my most favorite men in one photo...only missing my 2 boys and my brother.

I love to read what you write and will continue to do so. God is working all around us in Lisbon, despite many personal hardships. I may forward you my most recent happenings last night.

I am so proud of you, Neil, and ever grateful to a pursing gracious God who goes to no end to capture our hearts. love, laina

You are always welcome to my blog!

It was awesome to be with Linus and Phil at the Chateau. I would love to hear what happened the other night. I just read something Phil wrote up about candles and driving home at night, but it sounds like something else entirely. I am praying for you guys. I know that where you are is spiritually rough.

I am proud of you guys too.