Paul's Final Journey: an excerpt from Journeys to Significance 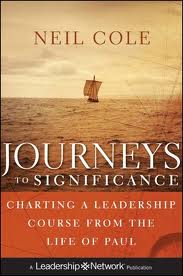 The apostle Paul’s last arrest landed him in a damp and cold dungeon in Rome where he wrote his final letter, which we call 2 Timothy. In 67 AD Paul was executed by beheading, which launched him on his final journey home.
After traveling 15,000 miles (8700 by land) [1], enduring four shipwrecks [2], starting churches in seven or eight people groups (perhaps as many as ten) [3], writing 15 letters that we know of (13 of which are in the New Testament) [4], enduring multiple imprisonments and uncounted beatings, he ended his life almost alone. According to 2 Timothy, his last days were spent short on time (4:9), Cold (4:13), Lonely (4:11), rejected by his own spiritual children (1:15), abandoned by his son’s in the faith (4:10) and betrayed by someone he trusted (4:14). Nevertheless, in spite of so few that stood with him in the end, he was a success (4: 6-8).
My oldest daughter, Heather, and I visited Rome a few years ago. We landed early in the morning and knew we needed to stay awake all day if we had any hope of adjusting to the time zone.  We dropped off our luggage and took a train into the city looking for one place: the Mamertine prison. This is where it is believed that Paul wrote 2 Timothy at the end of his life, hidden among some of the most famous ruins in the world. In preparation, we decided to read 2 Timothy every day while on the trip, which made the experience and the Scriptures come alive for us.
We descended into the Mamertine prison, also called Paul’s Prison. At one point, my head could touch the ceiling while I was standing on flat feet. I am just a little taller than 6’1” with shoes on. It is most often in places like these that God's real heroes are found.
Ironically, we visited the Vatican later that same day. Wow, what a difference a few hundred years can make for Christian leaders. Great riches of history adorned this palace, this religious city. The ceilings were way too high to touch, but they wouldn’t let you anyway as some are original Michelangelo masterpieces (the Sistine Chapel as well as the famous Dome of St Peter's Cathedral).
Both sites are impressive. My art background drew me to the Vatican, but my heart never left the cave. Being there and trying to imagine Paul in such a place at the end of such a heroic life changed me forever.
Heather and I looked at each other in the dim light with the smell of mildew and realized that this is the very rock where God inspired one of my favorite books of the Bible! Paul agonized over his few remaining days and the lasting impact of his life in this tiny place.
I couldn’t help but ask myself, “Neil, which place would you prefer as a Christian leader?” I am afraid too many of us choose the elegance and posh atmosphere of privilege before the cold, hard and unforgiving stone of Mamertine. But as I think of real heroes throughout history, most have lived their days in dark, marginalized places.
We, however, have taken to exalting those who make the most money and are the most famous, whether they be actors, musicians, athletes, or preachers regardless of their character. Real heroes, however, do not emerge from places of comfort, elegance and privilege, but are born from pain, hardship and trials. It is under the pressure of great conflict, conviction and challenge that heroes are forged. May we all choose the dark cave of obscurity over the posh privilege of the Vatican.
Paul’s Influence is found today, on the very screen you are viewing right now!!! He finished well.
“I have fought the good fight,” Paul says, “I have finished the course, I have kept the faith” (2 Tim. 4:7). As I serve the Lord I am finding that there are fewer people than you would imagine who are able to say at the end of their life words like this. As I mentioned at the start of my book Journeys to Significance, “the only applause that really counts is at the finish line.” A true hero faces the finish line with strength, nobility, courage and faith. Though he may not have been celebrated at the end of his life, he was a success, and he would die the champion that he truly was. He would have no shame at the end of his final journey.
[1] Schnabel, Eckhard, Paul the Missionary: Realities, Strategies and Methods, p. 122. This is an outstanding resource as is the authors two volume work on early Christian mission.
[2] It is usually agreed that 2 Corinthians, where he mentions three shipwrecks (2 Cor. 11: 25), was written prior to the shipwreck mentioned in Acts, therefore Paul experienced at least 4 shipwrecks.
[3] Besides 1) Cyprus, Paul left behind indigenous church movements in the 2) Galatian region, 3) Macedonia, 4) Achaia, 5) Asia Minor, and 6) Illyricum (Rom. 15:19) in just ten years time. He also likely started works in 7) Arabia, 8) Tarsus, 9) Crete, and 10) Spain.
[4] Not in the New Testament are his actual first letter to the Corinthians which he mentions in the letter we now call 1 Corinthians (1 Cor. 5:9) and also his letter to the Laodiceans (Col. 4:16).
Posted by Neil Cole at 8:39 AM

Indeed. The applause we need is at the end. What a joy it would / wil be to hear then: Well done, good and faithful servant. As we walk by faith and not by sight, we perceive the end of an age and eternity approaching. Then, many that have been last will be first, and many first shall be last.

Thanks for the refresher that Paul remained true to the end and that his end contained the opposite of the glitz and human fanfare that many leaders receive today. Such a reminder to be a true and humble follower of Jesus because Jesus may be all we have to lean on in times of trial or even at the end of our lives.