Heaven Must Be More Than This! 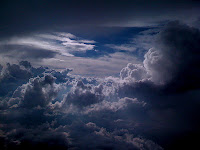 I fell into a dream. I found myself in the heavens. A voice was speaking all around me. Clouds surrounded me. Was this what heaven will be like?

Much to my surprise I found myself sitting in a seat that was not meant for a man my size. In the back of the seat in front of me was a pocket with literature explaining a plan of salvation, and an envelope in the event I wish to cough up anything.
We were all seated in rows staring at the heads in front of us as someone up front was delivering a message that was of life and death importance. But as I looked few were paying attention. Some people were nodding off while others were conversing to themselves in hushed voices. Still others were sneaking a peak at their phones even though they’d been told to turn them off. The speaker went on with a well-rehearsed message with compelling hand gestures speaking of escaping an impending doom by following the light that beckoned us to our salvation but everyone seemed inoculated to the message having heard it so many times and never actually needing it.
The leader of this group assured all of us that he had received the correct direction and would get us all where we were supposed to be. He would do all the hard work while we just go along for the ride, because that’s what he’s paid to do–he’s a professional. Everyone seemed to trust this man implicitly and put the well being of their souls in his care.
There was an intense amount of scrutiny for all those allowed to be part of this group–all had to pass through a narrow way one at a time. Some were more important than others and received preferential treatment. They had been coming to this place for a long time and more frequently than most and had special reserved seats up in the front.
There were strange rules in this place that we all had to conform to with blind obedience. The rules seemed to carry a life or death importance, but about things that really didn’t seem that dangerous. In fact, I think these rules were made up a long time ago and just passed along in a system that is easy to add new rules to, but near impossible to eliminate any old ones. Many of the rules were outdated but we all kept them just the same. All of us were just waiting for the guy in charge to finally stop circling around and just bring this thing down for a landing so we could go home.
Suddenly I heard a voice coming from above my head, all of us heard it at once. It spoke with authority and said, “Bring your seat backs and tray tables up to their full and upright position. Please fasten your seatbelt low and tight across your lap. Turn off all your portable electronics and anything that has an on or off switch.”
I sure hope the real heaven is not like this.
Posted by Neil Cole at 3:01 PM

Very clever! I love it!

"The captain has turned on the fasten seat belt sing..."

And these days, of course, there's usually a compelling audio-visual system that may distract us and keep our minds off the journey.