The Way to Go Fast is to Start Slow 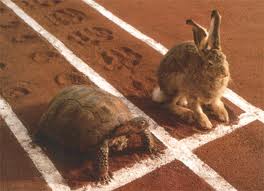 In our new book, Church Transfusion, Phil Helfer and I start by claiming that the true expression of Christ's kingdom should stand out as very different from all other religions. To demonstrate the radically different nature of God's kingdom we list 6 ways that the upside-down kingdom stands in contrast from the world's view of what is right and unfortunately often is at odds with the Church as well. In these blog posts I will list those six different paradigms of the upside-down Kingdom. The second is that The way to go fast is to start slow.

Exponential growth always starts slow. A large and fast start may be appealing for most church planters, but that actually negates the possibility that the work they are doing might ever become a spontaneously multiplying movement. All multiplication starts off slow and builds in momentum with each succeeding generation: 2 becomes 4; 4 becomes 8; 8 becomes 16; . . . There’s nothing impressive about these numbers at first, but by the fifteenth year, you have 32,768. By the twentieth year, you have passed a million and just keep on going. By the time you pass the thirty-fourth year, you have reached every person on the planet and have started reaching out to new solar systems.

According to David Garrison, author of the seminal book Church Planting Movements, one of the ten characteristics of a church planting movement is rapid reproduction. Because many people do not see reproduction occurring rapidly, they have taken issue with this assessment. Actually, if you are truly multiplying, rapid is the only way—eventually. All multiplication begins slow and small and builds toward rapid momentum over time. That is sound arithmetic, and you must respect both the slow and small start as well as the rapid exponential up-curve that eventually comes. That is how movements emerge. In a sense you must have both if it is to be an exponential movement—the slow, small start and the rapid exponential momentum later. Do not despise the day of small beginnings, but don’t stay there either.

Thanks, Neil! I needed to hear that today! Blessings, brother!