The Pressure to Plagiarize, Part Three

Plagiarism is sometimes very obvious, at other times it is not. At the end of the day you really can’t always find the initial source of every quip, story or idea. My question is: Why are we so concerned with credit for everything we’ve said?

I have had more than a few of my words used by others without credit given. I’ve also seen where someone used my material and attributed its authorship to someone else that had “borrowed” my ideas earlier. Honestly, that makes me excited…most of the time. Sometimes I'm troubled because I sense a less then genuine person capitalizing on my work for his own financial benefit…and ego. But most of the time I am able to recognize the benefit of ideas spreading.

We cannot catalyze a movement that spreads far if we have to be at the center of it all. We should want the ideas to be owned and spread willingly by each part of the movement.

I regularly preface some statements with: “We have a saying in our movement...” I do this for the very reason that I want others to own the idea and say it as their own rather than simply quote Neil Cole. I want the movement to own the idea. This actually fosters an environment where there isn't individual credit for an idea. Sometimes we must sacrifice individual ownership for the sake of mass ownership if we want a real movement. At the end of the day we want people talking about Jesus more than about their pastor or favorite author...don't we? 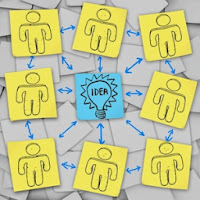 That is a very different value. It's a more apostolic (sending) approach to words and statements. You see, in a movement ideas must be owned by everyone so that they will get passed on by everyone. People must be so gripped by the idea that it becomes their own for all intents and purposes. That is how they go from consumers to communicators. Perhaps that is why Paul called the gospel "my gospel." If you are always worried about who gets the credit then you will not witness a movement. You will end up owning your own material and getting the credit, but you will not spread those ideas far and wide. There is still no guarantee that others wont plagiarize your idea anyway.

I’ll never forget the time I was at a restaurant and saw a couple guys using one of our Life Transformation Group (LTG) cards. I asked them about it and one of the men enthusiastically evangelized me with the concept of LTGs not knowing that I was the author of it. I reveled in that moment and did not bother telling them who I was. I simply said, “Wow, that’s great…I think I'll do that too.”

Of course, it wouldn’t be right for me to take full credit. The LTG concept was first inspired by John Wesley’s class meetings. But then Wesley got the idea from the Moravians.The early church was said to meet early in the morning to ask each other hard questions of character...so how far back do we go with the credit?

Neil,
Your heart and spirit has once again helped set the rudder in order.
Manny