I thought this nice review would be of interest to some of you. I can say that Mr. Kim was able to understand the heart of why I wrote the book. 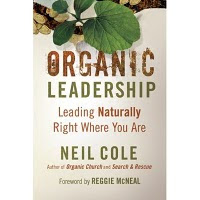 Neil, as a Church Planting Movements guy, has always been about simplicity and reproducibility. These values, to no surprise, come out here in Organic Leadership as well; but he uniquely directs them to the topic of Christian leadership. The result is a book unlike the run-of-the-mill, 10 steps book on leadership. He doesn't come across as a John Maxwell does where you feel like you have to buy more of his stuff or be like him or else fail. Nor does he come across as a typical Christian preacher talking about leadership with perfectly alliterated points that sound good but lack authenticity and personal stories of provenness in the real world. Instead, when you read Organic Leadership, it feels like he REALLY wants and needs you to be the leader God made you to be, so he'll tell you about the passing of his father-in-law, tell you about his "low point" of being a pastor AND a paper boy, and other things that a true spiritual parent would roll up his sleeves and tell you over breakfast. There is a different level of weight or authority that you will sense in this book, and I suspect it has to do with the fact that these are not just ideas, but the communication of a way of life learned over the years -- a way of life that he wants us to grasp for the times ahead.

The first section (120 some pages) is incredibly convicting and offers a prophetic critique of the way leadership is understood and practiced in the West. This is the underbrush that needs to be cleared away to go further in the organic leadership journey. We must get through this before we talk about tools and new paradigms. But be warned! Neil pulls the veil off the truth that most of us, leaders, have never contemplated: WE are part of the problem! Since many of us have never gone there before, I anticipate a feeling of discomfort during this section. Like me, you may have to stop reading at points in the book to pray, to repent or to contemplate further. Neil courageously asks us what most parishioners would never dare say to us. And for that reason, we need to listen all the more. Neil, coming from the organic point of view, asks new questions like: have you ever considered that the content, setting, frequency and manner of our "teaching" is actually having the opposite effect of what we want: stunting the church's growth?! Traditions like these go unquestioned in our evangelical cultures, but if they were indeed true, would we listen and change course? The whole section has a feel of a heavier and more radical version of J. Oswald Sanders' Spiritual Leadership where he asks such important questions like are you spiritually plateaued? are you acting more like Jesus or the Pharisees? But it's not coming from self-righteousnes or anger but out of a burden to see the world reached for Christ through leaders like us.

Once you get through these hard questions and topics, you will find an illuminating section on paradigms and perspectives that cause us to lead off center: like the unnecessary and unbiblical separation between secular and sacred or between clergy and laity. There is also a great section on starting leadership development with not-yet-Christian folks instead of with the usual more mature Christians we recruit. This part is worth paying attention to because it links leadership development to MISSION instead of to the shepherding of the local church where we develop or recruit existing leaders to our programs -- thereby creating no new leaders in the net cause! Neil humorously mentions that some of the best leaders of tomorrow are waking up with a hangover and in the wrong bed today! The playing field significantly widens without separating "evangelism" from leadership development; they become part of the same disciple-making activity. Sounds biblical, doesn't it?

After that is my favorite part, there is a fantastic section on mentoring. I think the price of the book is found here. It is filled with profundity and experience... and, again, elegant simplicity. I have "discipled" my share of people over the last 20 years, but never did I think to do it as he recommends -- with an eye towards obedience and multiplication over content. Neil gives advice like:


He simultaneously lowers the bar on mentoring while also raising it by taking us back to the way of Jesus and Paul. After reading this section, I immediately made changes in the way I was relating to a not-yet-Christian I am doing a Life Transformation Group with.

I also like the concluding section where Neil offers examples of new kinds of leaders in the movement who have given up traditional structures and roles for the sake of mission. Real life examples always help flesh out the multi-faceted look of what the author is describing and help open up our imagination to what the future holds for a new breed of leaders.

One final thing that I like about this book (and about Neil on the whole) is that he is not a mission deconstructionist who is just saying everything is broken. We don't need more of those! Neil Cole is very much a reconstructionist who is showing us a better way that 1.) he has lived out and seen reproduce internationally, and 2.) is actually rooted in Scripture. I think this is why he has been so readily embraced by people across the world as an ambassador of a more missional way. This reconstructionist orientation shows up in Organic Leadership quite often as he recommends [here it comes] simple and reproducible tools like the Seven Signs of Jesus from John's gospel, or Mentoring sheets that are profoundly simple, or Life Transformation Groups that are leaderless and multiply, or Truth Quest which teaches theology in community and with different points of view. Not a lot of Simple Church people are recommending alternative ways, but Neil is -- and churches across the world are multiplying as a result.

If you, like me, have long thought that something is off on the way that we "lead" in the church and long to know God's natural design for leadership that can truly transform the world, then I heartily recommend Organic Leadership for direction in this new way for a new time.