The Way to Be First is to Be Last. 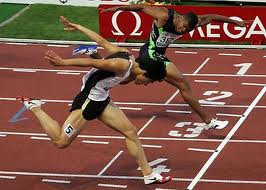 In our new book, Church Transfusion, Phil Helfer and I start by claiming that the true expression of Christ's kingdom should stand out as very different from all other religions. To demonstrate the radically different nature of God's kingdom we list 6 ways that the upside-down kingdom stands in contrast from the world's view of what is right. Unfortunately this is often is at odds with the Church as well. In these blog posts I will list those six different paradigms of the upside-down Kingdom. This is the fifth: The way to be first is to be last.

It is the American way to push and pull yourself to the top of the ladder. We have annual articles in our Christian magazines ranking our successes as the fastest growing churches or the largest churches. We even occasionally have lists of the fifty most influential people.

Jesus was never impressed with these things. He clearly says that the way to be first is to become the last. Most of the church growth occurring in America is merely transfer growth at the expense of other churches. The current mood of Christendom is that of competition, where each church is striving to grow with little to no regard for the church that is losing its members to the growing church.

Jesus did not come to gain permission and empowerment but to give it away. He said, “The Son of man did not come to be served but to serve and to give His life a ransom for many” (Mark 10:45). Those who would follow Christ must follow His example.

Empowerment is not just for leaders; it is also for congregations. Imagine what would happen if the Brethren church in your town were more concerned with the success of the Baptist church. What would happen to the spiritual climate of a city if the local Presbyterian church were praying for the success of the Pentecostal church and vice versa? I cannot help but believe that if the churches that make up the body of Christ, the one body of Christ, were to empower and lift up one another rather than attempt to ride each other’s failure into their own success, a whole town or city would be transformed. The gospel would not just be preached but demonstrated in power. This can happen when a congregation is willing to take up its cross and die. Perhaps your church should lead the way.

In church transfusion, the leadership needs not to pursue being above others but to lift others up. In fact, if a church were more concerned with the success of the church around the corner than its own success, we firmly believe that God would honor such a church with fruitfulness. Test us on this; we dare you.
Posted by Neil Cole at 8:41 AM